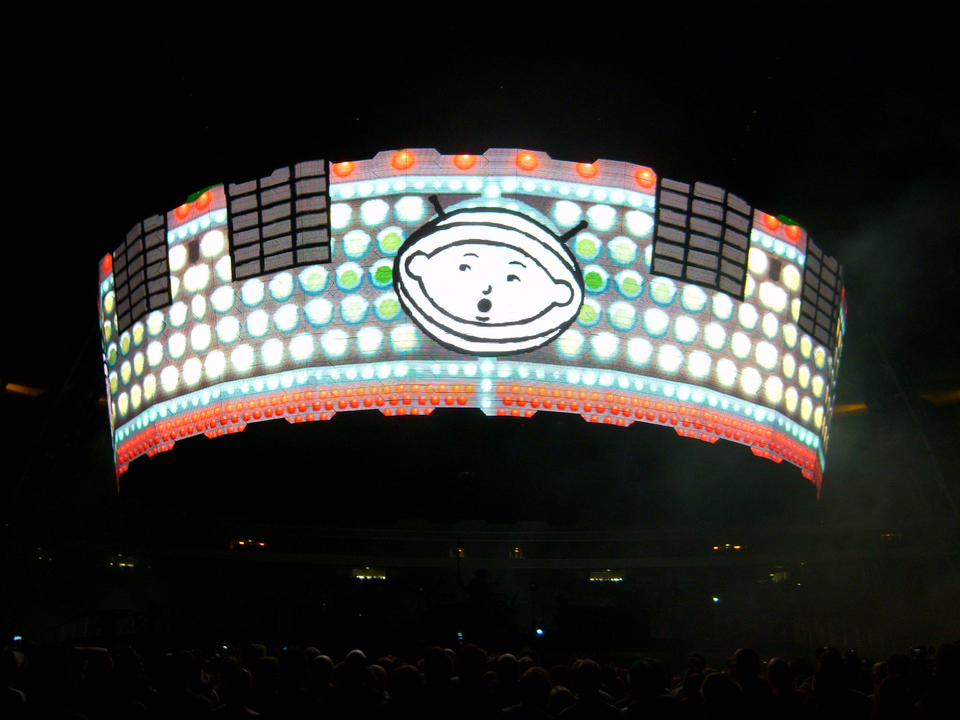 "?!?!?!?… Can`t pick one out right now - doing this from my experiences and not general, overall with the help of Videos and Bootlegs. So: Lovetown? Because back then I so, so wished I could have been at a show but was too young? ZOO TV / Zooropa? Actually I had been too close to the stage to fully experience the media-overkill-greatness that was going on. Pop? Same, been too close to the stage to actually get the full experience of that huge screen. But what great tours they were. Elevation? WOW - Indoors, start with lights on an then BAM, WOW! By now I tend to skip Beautiful day but then I kept listening to it. Verigo? Hmm?…No… Though: 1st leg with An Cat Dubh / Into The Heart (the Ocean, Gloria)… But not at the show in attended. :-( :-( Hmmm? very good memories but better memories other shows I went to. 360? So, two shows for me on two different legs of the tour. 1st time in the back with this whole claw-madness coming to life (wow), 2nd time in the front / side, inside the circle being closer to the guys on stage. Those two nights combined: GREAT I-e? The first of the two shows started of with a big / huge bummer for me. All good again once the show started. Maybe I should pick this tour? the two shows in Cologne that I attended: WOW Great, great memories!"

"…and Pop! "Rattle And Hum" - Hmm… why? I loved it, when it came out, not a full live recording (sadly) but live songs from the Joshua Tree tour. Only later I had my first Bootleg - 1987-08-08 - Cork, Ireland - Pairc Ui Chaoimh - on Cassette. (Years later I got to know someone from Ireland who could tell me how to pronounce the stadium's name) "Rattle And Hum" - Maybe it has to do with my age at the time and that it was the first new record that came out after I became a fan? And I linked it so much to the Joshua Tree Tour and the live songs in the film? I don`t know. BUT Leave out all the live songs and just play the studio tracks. Love those songs! "

"Well yes, always and forever "With Or Without You" - Hmm around when I was like 17 (- 18) I kind of rediscovered the Boy album for me. "Shadows And Tall trees" grew to become one of my favorite U2 songs. "A Sort Of Homecoming" has to be here, too and, maybe oddly for some, I really, really like "Elvis Presley And America". "

"I was there when it started, you know – way back in the 50s. I had a great idea! African rhythem and european sence of melody – pop the two together and shwoops you had a very exciting movement." (Macphisto) ;-) … … … "I´m stuck somewhere between highschool and oldschool" (Alice Cooper) :-) … … … So: My older Cousin`s room had been paved with postern by U2. (Fan since `83) I used to regularly watch the german music-tv-show called "Formel 1" So, yeah, U2 Videos were shown, aswell. 1987 / 88 my older sister´s friend gave me his U2 records to tape them. LPs and Maxi-Singles. The first U2 LP I bought was "Under a blood red sky" Rattle & Hum was my first new U2 record. I saw the Movie in the movie theatre but it was ?!? hmmm…english… "it was too low in the screening", there were only half of the first row of the german subtitles visible, the lower end was missing because the film had been…put into the projector incorrectly - or something. So, being 13 Years old I did not get the Interviews, not all of it. Rattle & Hum Tour - Remember being pissed when the Concert my Cousin went to happened and my 14 year old self had no chance to see U2, but was at home baking cookies for Christmas with Mom and my Sister, who wished to be at one of the shows, aswell. -laughing - New Year`s Eve my parents were officially allowing me to stay up and record the Concert. - As if I would not had done it anyway - Zoo TV Tour - AAAgh - way afterwards my parents said that they would had allowed me to go to the show in Frankfurt (2nd leg, indoors) with my Cousin. Argh Zooropa Frankfurt: My first show! Skipped School, been there way early, knew that after the first few songs they would be on the second stage, been there at the side but 2nd or 3rd row, then made it to the front! - and Bono kept being on that 2nd stage as I felt. Been right in front of The Edge though :-). Went there with a friend of mine from School. On the way one of her car-windows did not pull up again to close, we had to stop at a Service station. They removed the …?!?… door trim? and placed a piece of wood to keep the window up and closed. Pop Mart Tour: From that tour on I have gone to the U2 Concerts with my Cousin. Being rather in the front with a closer view to the main stage than the second stage. Remember complaining to my Cousin that Bono kept being on the second stage so much and him replaying that I should calm down because Bono would only pull up women on stage anyway. - Laughing - So next - the Internet - No more going to the lokal record shop and bying the tickets. … and going to Cologne for the Elevation Tour without a ticket - because. BUT -Sooo great - 2001-07-13 Cologne, Germany - I know the recording is shite but the show is still… WOW - in my memory. Vertigo Tour: Opposite end of the stage at the end of the stadium. Before we went to the concert I managed to stay unknown of the setlists played so far. On the way to the show my Cousin had two bootlegs to listen to and… they played An Cat Dubh! But no, not in Gelsenkirchen - no Gloria or the ocean aswell :-( - But (still) good memories. 360 Tour: Once again me and my Cousin in Gelsenkirchen (auf Schalke) This time I was accompanying a vacation tour for people with special needs. I went with my own car instead with the bus and drove to the show from the vacation spot. 2,5 hours after the concert my Cousin texted me that he finally made it onto the Autobahn (A 61) leading to home (my parent`s place, aswell) or had it been the Autobahn at all!?! and I had already been way, way further - for those who know, Kassel, driving the opposite direction. 360 Frankfurt: Just plain great - I&E Tour: Brrrr - I know I am a grown up and I know for quite some time what they say about records and tours - but this news that they would play two shows in a row - you know - being different - BAM - old 13 year old, being naive, I have to confess. So the tickets for both shows in Cologne were bought before I read any news about the shows not being like that. BUT - I finally!!! got to hear BAD and 40 the second night!! Bummer on the first night was that the stage was on the opposite end of the venue than indicated on the ticket page eventim. So, instead of having seats near the main stage we have been at the other end of the venue. :-(