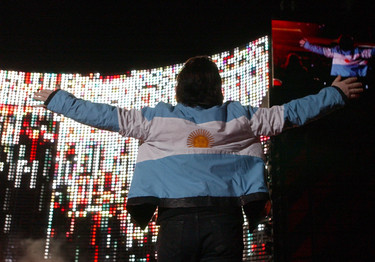 U2 and Latin America: A home away from home

U2 has lived very special moments in Latin America. From political causes to epic shows, join us reliving th..

Support act: Muse
Performance notes: First ever U2 concert in Argentina that is not held in Buenos Aires. Even Better Than The Real Thing is performed for the first time since 9 June 2001.
Setlist and comment provided by U2gigs.com.

Here you can find and post reviews of this show. We encourage everyone that either attended or listened to this show to write a review. Currently we have 7 reviews for you to read.

Fairly good stereo IEM recording with many almost clean tracks, occasional interference on some tracks and some tracks with notable interference, mainly towards the end.

Each of the South American shows was an amazing experience. Once again the crowd was very energetic. According to u2gigs.com, North Star was "only" played 15 times during the 360 tour.

Think about it yourself. Hopefully you will realise that:

- It is not a good idea to convert this set of files or to remaster this recording except for your personal use only.
- You should ask before using this recording for an audio matrix / multicam video or before uploading it to another tracker.
- Anyone selling this recording in any way is not smart enough to think of a legitimate way of making money.