U2start.com was founded in July 2006, the site started out as a personal website for the founder of this website, member Remy. The goal was to create more of a personal website for the fan who wanted to find everything about U2 on one place. Due to the very limited availability of U2 bootlegs on the internet a catalogue was developed where fans could explore and download U2 shows and audio recordings. U2start was created out of the things Remy missed as an U2 fan on the internet. U2start's mission is to become the ultimate fansite containing everything you want and didn't know you wanted as an U2 fan, all in a great community.
Below you can explore the history of U2start through it's different versions: 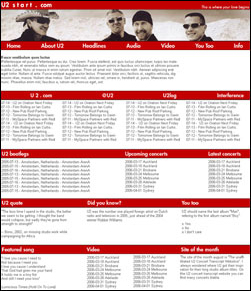 The first U2start was built in a month's time and featured headlines from U2 fansites, some bootlegs and links to YouTube U2-videos. No user functionality was included, all content and information was available for everyone. 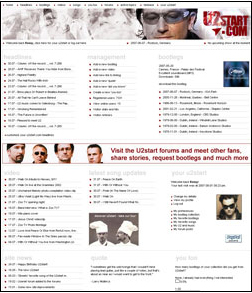 As the site gained popularity it was time to make U2start a bit more mature. U2start v2 was born, which included more content and the ability to create a U2start user account. With its launch the forums also opened which marked the start for the website being a U2 community. 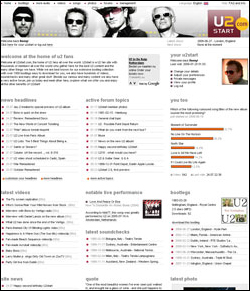 U2start v3, launched in August 2007, featured a new lay-out, lots of new content and many improvements for the forums. This version also marked the launch of the photo section. Shortly after the launch of v3, a mobile website was introduced. It was in this version that we passed the 1000 audio recordings being available on the website, which was - and still is - an important landmark for U2start. 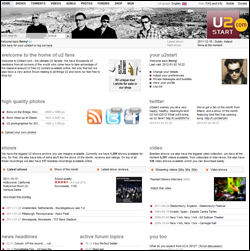 For this release the development team was doubled from one to two with the addition of Chris (user Risto). Thanks to Chris we completely revamped our bootleg pages - including a catalogue, multiple sources, more bootleg information - and Later on in version 4, we also added LiveTopics, thanks to which we don't have to refresh our browser to see new activity or participate in the forums. 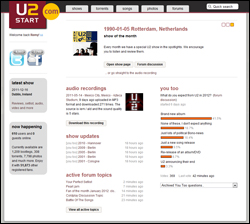 With more than 50,000 registered users and a busy U2 tour, the sites activity and content peaked as never before. It became inevitable that we needed to 'dream it all up again', this is what we did for v5. This release featured a complete redesign and a brand-new backend for the crew to work in and manage all the content. 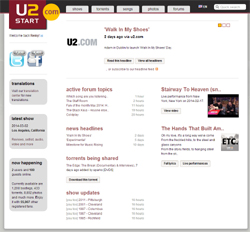 Whilst still maintaining the design introduced in v5 - and officially even the same public version number, U2start's development team was always working. Introducing more than 10 translations to make U2start available for as many fans as possible, alongside with great new concepts like U2start liveshow and social media, U2start kept on growing. 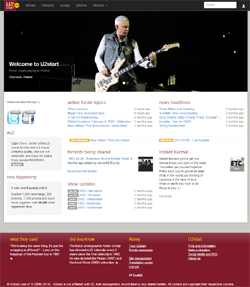 Aware that a new U2 album and tour could be imminent, the U2start development team started working on its biggest adventure to date to make sure to be prepared for all that comes with a new album or tour. Not only a new lay-out was introduced - which biggest accomplishment is that it made U2start 'responsive' and a great website for all (mobile) devices - but also a lot of the backend code was improved and rewritten. Some functionality that was updated even dated from the very early dates, almost 8 years before. To complete it, all show & recording structure was rewritten to make it possible to categorise as much information as never before.

As long as U2 is around, U2start will be working on improving and extending our community. If you have ideas for our next version, or want to help us out (we are always looking for PHP programmers), then do not hesitate to contact us.