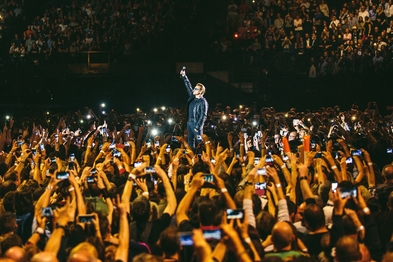 Performance notes: U2 make their first ever appearance at the Glastonbury Festival, headlining Friday night 2011. They were originally one of 2010's headliners but had to pull out in May 2010 due to Bono's back surgery. Bad is played for just the second time in 2011; Out Of Control for just the third time in 2011. When performed, Moment Of Surrender is normally last in the set - this is just the second time it appears in a spot other than the closer, following U2's appearance on Saturday Night Live on 2009-09-26. The only three songs in the set which are not singles are Until The End Of The World, Bad, and Moment Of Surrender. An archive of tweets for this show can be found here.
Setlist and comment provided by U2gigs.com.

Here you can find and post reviews of this show. We encourage everyone that either attended or listened to this show to write a review. Currently we have 11 reviews for you to read.

Highlights: Moment Of Surrender, Until The End Of The World, The Fly, One

i’m sure that at least the 70% of the crowd was at Glastonbury only for U2 which was a great thing. But festivals after 1985 weren’t anymore a thing for the band as they became such a global and bigger band

Help! Which recording should I choose? How do I play this? How can I convert these files to MP3? Answers to all your questions and a lot of general information, we have documented it all on our help and info pages.
Download soundchecks for this show: 2011-06-24 - Glastonbury
We hope you enjoy this recording! Can we ask you to write a short review after you have listened?.