The first time I saw U2. I wish there was a full recording of the show. I'd love to hear it again now

best show i've ever been to, even when it rained during the last couple of songs and i got saturated.

Setlist:
09 - Tryin' To Throw Your Arms Around The World

LikeASong notes:
While working on the new U2start Video project (https://u2start.com/shows/videos/) we have stumbled upon some rare footage.
This is one of these examples. No recording of this Brisbane show exists, so any document from it is highly valuable.
This is a soundboard and proshot recording of Tryin' To Throw Your Arms Around The World. It comes from a private tape sent
by U2's crew to one of the girls that went up onstage with Bono for the champagne thingy. Isn't it amazing?

Here's the original comment by the girl (found in this video https://www.youtube.com/watch?v=InW50pndbkk) :

"cathlawrence: It’s all U2’s production company’s footage.
Back in 1993, when there was no internet o Google searches,
I made contact with their people in Ireland stating I was the girl on stage in Brisbane.
Then many months later a VHS arrived. It’s amazing and very special".

So, for the sake of completism here's the very only recording of Brisbane '93 that will ever see the light of day.
And yet another proof that U2 record most/all of their shows in soundboard and proshot video! Imagine if they ever open up these vaults...

Transferred and uploaded to U2start.com by LikeASong on the 4th of May 2020.
Not to be shared on any non-U2 site that uses cashback links.
Love and peace.
www.u2start.com 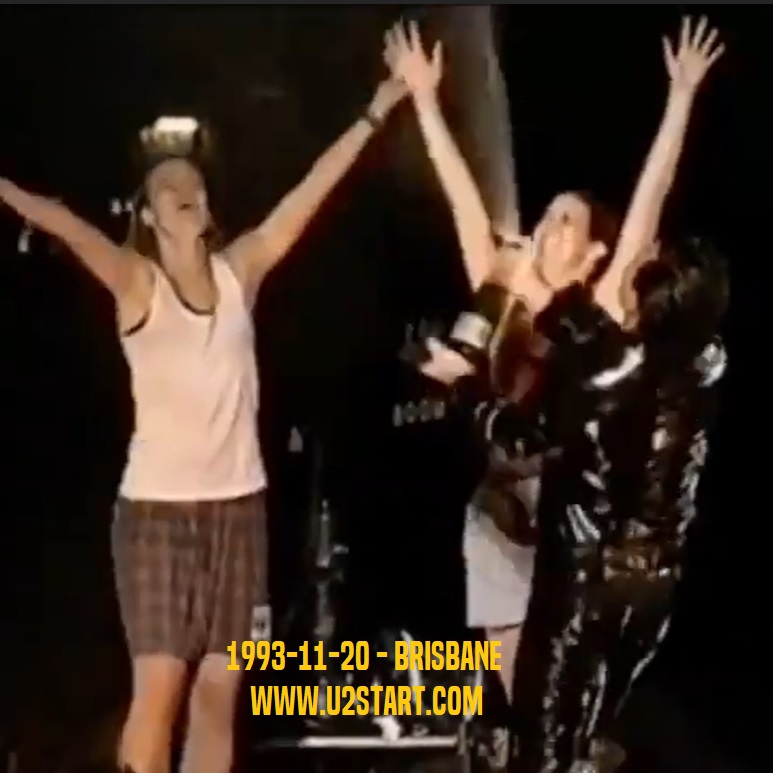