Performance notes: Popmart Tour debut of Slow Dancing. It was only played once again on the tour, on 7 February 1998 in Buenos Aires. At the start of If God Will Send His Angels is a very inconsequential snippet - but a snippet nonetheless - of Ultra Violet. Bono sings the first three words, "sometimes I feel", in a melody distinctly resembling that of Ultra Violet.
Setlist and comment provided by U2gigs.com.

1 from Sweden: jamonty
1 from Arizona: beckertime

This was one of the most amazing concerts I have ever been too. I've played over 2000 shows and been to a few hundred concerts....and this is one of my favorites. The band was ON FIRE...blew away Joshua Tree, LoveTown, and ZooTv dates I have seen. This tour is one of the amazing surprises from the band...and this show the best of the tour....or any tour (seen them all) with the exception of the the Paris 2015 shows the best of the 50 or so times I have seen U2

This part is only rated, not commented on
Recording: "Amazing Grace (remastered by Francesco Donadel)"

A very need moment of joy in a very dark time

See my above comments about the show. I was in Edmonton for the funeral of a very dear friend. The lightning storm that came up during the encore break...made One and Hallahuh damn near transendant. The dark stage the lightning in the background.

CT's notes: Received this as a .shn set via DC. Decoded to .wav, edited d1t07 so that the large edit is now a small "pop". If anyone knows how to further smooth this transition please feel free. Adjusted the volume from the start of the show until this edit (when Bono sings "...the highest mountains...") to match the rest of the recording. The source of this boot is pretty clearly the proshot video of this gig; the edit occurs in the circulating video as well. Encoded to FLAC6 with Traders' Little Helper, and corrected the SBE at the end of d1t07.

Please do not sell.
Enjoy. Dana. 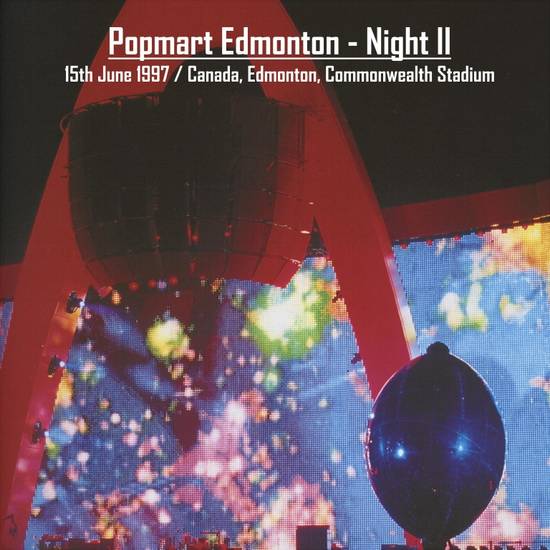 This recording was transferred from the original "Amazing Grace" Silver CD, and it was then rematered by Francesco Donadel.

Very Good Soundboard, quite better than the original "Amazing Grace" bootleg; this is a truly outstanding bootleg -- sharp, crisp sound with prominent vocals and instruments. Crowd noise is extremely minimal.

Comments: This bootleg is by far the best one from the first leg of the Popmart Tour that I've heard so far. I'm a bit surprised that with today's technology most bootlegs recorded during the first leg sound pretty crappy. Luckily this one's an exception. I can't even tell for sure whether it's an audience or soundboard recording, although I assume the former. The setlist is pretty standard, as with most of the Popmart concerts. Bono shouts "Having a ball at the mall, y'all! Supermarket Superman!" during "Even Better Than The Real Thing". Before "I Still Haven't Found What I'm Looking For" he says he would like to see The Edge as mayor of Edmonton, which draws a big cheer from the crowd. There's a nasty edit 2:20 into the song, but it's the only real flaw I could detect. Bono sings he feels "like a bird flying high in the northern sky" during "Last Night On Earth". It's a shame "If God Will Send His Angels" is played without drums and bass because this way it sounds very boring. A very nice surprise is the acoustic rendition of "Slow Dancing", which has only been played a few times before. Bono adds a line about Edmonton to "Staring At The Sun" and The Edge dedicates his karaoke version of "Sweet Caroline" to "Todd - you know who you are". "Discothèque" sounds great, along with "If You Wear That Velvet Dress". During the intro to "One" Bono thanks the Fun Lovin' Criminals, Howie B and everyone who came out to see them play. He sings a very short part of "Hallelujah" and dedicates it to Jeff Buckley, bringing an emotional end to a very good concert.
Eight tracks from this concert - along with the Tibetan Freedom Concert - can be found on PRISONERS OF CONSIENCE and MYSTERIOUS WAYS, but this bootleg has better sound quality. The artwork is fantastic, but it's no wonder given the fact that it was taken directly from the official Popmart Tour Program. My advice? If you want to buy a bootleg from the first leg of the tour, be sure to get this one. It's a lot better than all the others I know of.