This part is only rated, not commented on
Recording: "Wireless & Audience Matrix" - 4.5 stars

Good show, standard early Vertigo show. The best part of it is the excellent sound.
Highlights: Beautiful Day, with a lovely snippet of So Long Marianne (only time snippeted). An Cat Dubh/Into The Heart (Bono continuously asks if the boy Jack that he got upstage returned safely) and The Fly. One is dedicated to Brad Pitt. Bono thanks him for the film he made (maybe his documentary Journey To Africa).

Produced, cut up, and mixed by sharebear/hoserama

Special thanks to everybody that helped me out on that run...there were lots!
And extra special thanks to Butterking of JEMS for the excellent audience and clearance for the mix.

One show that I always wanted to mix up, and when JEMS posted their excellent audience source
I decided to take a swing at it. Several aborted attempts, but have finally finished it up.

I saw 15 shows that tour, and honestly, this was probably my second favorite show. A seemingly
standard show, but very energetic and solid all the way through. Band seemed in very good spirits
and getting into the groove of the tour. Edge's daughter's doctor came out in soundcheck, which
they discussed during the show and soundcheck.

I remember among the first run of shows, each show was successively better than the last. This
show was the final step in that (5th show of the tour). Better than the san diego and anaheim shows.
The second LA show was a slight step down from this show IMO. San Jose x2 and Phoenix 1 weren't as
good either. It seemed for Phoenix 2 they got a source of inspiration and fired things back up.
But by then, they were clearly settingly into the set. This show showed a band still figuring
themselves out, but getting into some real fun during the process.

Released this show in celebration of the 360 tour firing back up. Just listening to some of the
songs on this tour makes you realize those early vertigo setlists were among the best they've had
in a long time. The Boy songs (Electric Co, An Cat Dubh, Into the Heart), oldie goodies (Running
to Stand Still), and great run of ZooTV set (Zoo Station, Fly, Mysterious Ways). 360 can't touch that.

Anywho. Good recording and mix IMO. It does have the click track and count ins, as par the course.
Some minor channel issues here and there. Nothing too distracting IMO. Did processing to make it
sound better to my ears. If that doesn't meet your standard...then gear up and get it done yourself.

Please don't sell this recording in any way - no cash for
blanks, 2:1s, or any other form of "getting paid for your
time". Just share it freely.

Please do not attempt to remaster this recording and spread it
around. There is little to no point of trying to compete with
the original processing. If you need to re-eq it for your own
listening pleasure, that's fine, just don't spread it around.
If you're going to destroy the sound of some ultra-spiffy
high-end rigs by encoding and spreading them via mp3's, please
keep them on your own computer and not dilute the tradepool.
And I would really appreciate not seeing this sendspaced,
ysi'ed , torrented etc all over the web in 17 different
formats. If I want it torrented on a different site, I'll do
it myself. 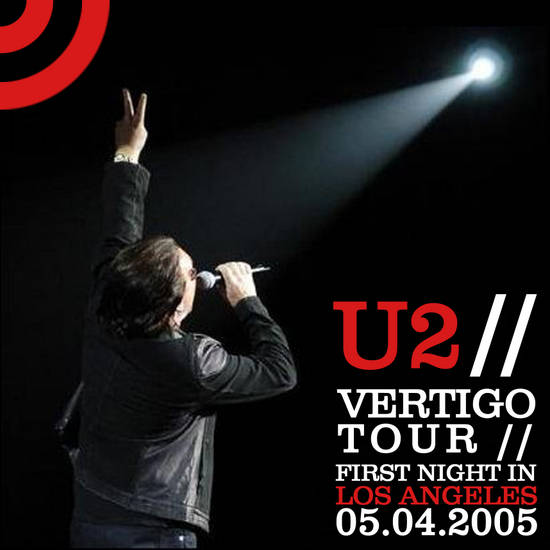 I realize this show exists in at least two other good versions,
but the performance and my recording have always been favorites.
This was the first show JEMS saw and recorded on the Vertigo tour
and the impact was considerable. I hadn't felt this thrilled by a
U2 show (despite seeing some good ones in 2001) in I don't know
how long.

Recording location was almost directly even with the front of the
stage, with a PA speaker aimed squarely at me and as close as was
possible given the configuration. The only distraction at all was
a persistent clapper next to me which we painstakingly attempted to
reduce in Wavelab (he's still there but it is nowhere near as
annoying as it on the master).

Chrisedge had asked to use my master when he authored this single
camera DVD, but other than that appearance, it has never circulated
as far as I know. Perhaps this is a vanity release but hopefully
some of you will enjoy this alternate source. Samples provided.