Performance notes: Initially scheduled for 2010-06-07 with Lenny Kravitz as support act but postponed to 2011 on 25 May 2010 due to Bono's back surgery and rehabilitation period. Rescheduled date announced on 13 July 2010. Tour debut of The Fly. Earliest Streets has been performed in any setlist since January 1990. An archive of tweets for this show can be found here.
Setlist and comment provided by U2gigs.com.

Excellent performance. Vertigo is a bit messy at the beginning which is the only real distracting error for me but there’s enough greatness going on to overlook that.

Just down the middle with the nature of the recording.

Excellent show, nice to hear plenty of tracks from AB plus Zooropa. Changed the order in preparation for Glastonbury which I thought worked well.

Show Comments:
Great great show. After the setlist was growing stale, they finally did a "blender" show. Basically throw the current songs in a blender and restructure everything. It was a lot of fun trying to guess the next song during the show (although it was mostly the first half that got switched around). Easily the best 360 show I saw.

Recording Notes:
My usual 2011 rig. 3-4 feeds (used Bono/Edge/Adam for this mix) into a Tascam DR680. Talltaper was pulling from the stands, while Edgar was in front of the mixing tent. No major issues on the recording side.

Mixing notes:
Counts are scrubbed, but you might hear the occasional artifact. Clicks are mostly scrubbed, although there will be a bit of a remainder in sections. It's always a compromise, and I'd rather remove 90% of the metronome and leave the music intact instead of removing 99% of metronome and damaging the music.

Completely different formula and balance from previously released mixes. I think it's a significant improvement from the other sources, but feel free to make your own choices (see video comparison). If you prefer the other sources, go take those for a spin.

Right around the Oakland show in 2011, the U2 monitor crew started cranking the high end on the vocals in Bono's feed. I'm guessing they thought it would help his vocals cut through the mix, which it did. However, they overdid it and it would overload the sound processing on the IEM transmitter. So you would get distortion and spike everytime Bono made a loud -ess syllable (also known as sibilance). Very annoying, but I guess it didn't bother Bono. You can handle the sibilance with a special sidechain compressor called a De-Esser, but the distortion was broadband. I tried some new tricks to deal with it, but you'll occasionally hear some artifacts of the distortion. I'll argue that it's far cleaner than the 2012 mix, and much preferable to the straight released Bono feed (which had some remastering work that actually BOOSTED the high frequency distortion).

As always, encouraging people to get into taping and mixing. Just take the craft seriously and it will reward you many times over. There's no point in complaining about missing recordings or subpar quality if you're not contributing--pushing 1's and 0's around on the internet is no comparison for taping.

IEM recordings are not for everyone. If not they're not your thing, either sonically or ethically, there's excellent alternative recordings out there.

Similarly, I'm mixing primarily for my ears. This is what sounds best to me. This may not sound best to you. That's a fair statement. I'm open to honest criticism (although you should have caught me when I was working on the mix!), but pointless complaining is unappreciated (naturally). Let's play nice. Or maybe lug in recording equipment and make an alternate mix of your own sources.

Feel free to remaster/remix this recording. Just keep it to your own computer and iPod.

Also, please don't torrent or share on other sites without at least dropping me a line and asking. I may want to just torrent/share it there myself.

Please ask (and wait for permission!) before putting it into any matrix + video production. If you ask nicely for a quality high-res video project, I will likely say “yes”. If you put it on YouTube or cell phone video production without asking, I will send my cats from hell to chew your computer cables.

Recorded at 24bit/44.1khz. Matrix of a mixmash of feeds (no audience source)

Thanks to DS, JW, TD, ET, EN, and several other folks.

After much controversy over this show, decided to finally release a full mix. Easily the best show of the bunch that I saw. Band was very hot, shook up the setlist (and found a new groove for the tour).

Did some tricks to minimize the click, but still there slightly. There's no helping the counts though, just get used to them after a while. Sounds a bit better than Denver IMO, but in general fairly similar sounding.

U2 IEMs are not for everyone. If you can't stand the clicks/counts...then rock out to the audience sources. If you have issues with the mix, there is a quite nice raw Bono mix (with some remastering applied to it) released by our U2 friend Nuno. This mix will sound significantly different than his recording.

During the show, I was hoping that One would lead right into Ultraviolet, but alas they like that too much in the encore (and the One > Streets transition).

Please do not attempt to remaster/remix this recording and spread it around. There is little to no point of trying to compete with the original processing. It just creates problems with conflicting effects and processing errors. If you need to re-eq it for your own listening pleasure, that's fine, just don't spread it around.

Also, please don't torrent on other sites without at least dropping me a line and asking. I may want to just torrent it there myself. Please ask (and wait for permission!) before putting it in any matrix + video. If you ask nicely I will likely say yes.

Enjoy y'all. I will likely post a 24 bit version of the show soon. 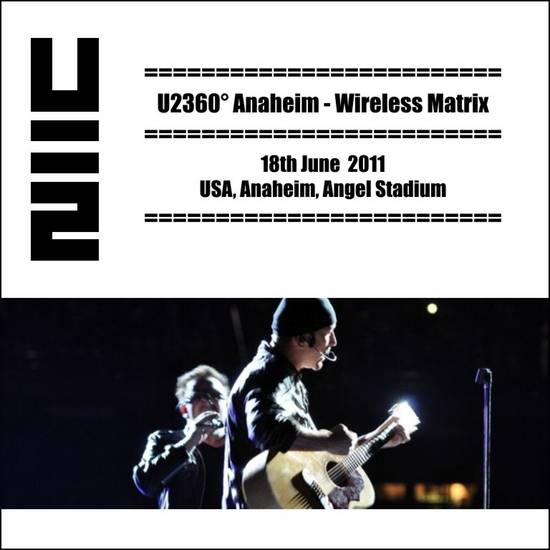 
Best show of the tour, so far? I can't say for sure about that, but I knew we were in for a special night when they opened the show with 5 songs from Achtung Baby. A great show from start to finish and easily the best U2 show I've seen since the Elevation Tour. Recorded near the top of the left field stands. A solid recording that came out a little better than I expected and the crowd around me was well behaved. A nice tribute to Clarence Clemons at the end(RIP Big Man) and I thought Bono holding the printed lyrics to Jungleland underscored how important it was to him to get them right, as he has been known to forget the lyrics to cover songs on occasion. Enjoy. 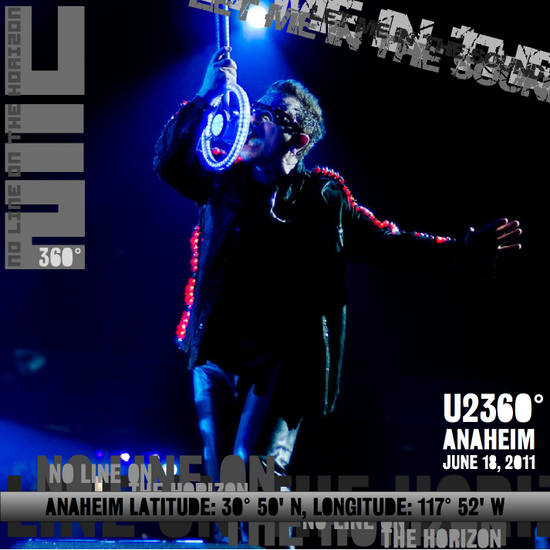