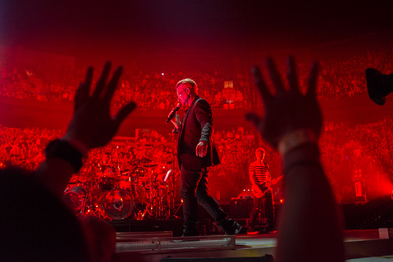 An account of U2’s longest show runs in a city

In July 2015, U2 played 8 consecutive shows in New York City within 14 days, the longest run of consecutive ..

Performance notes: First performance of Two Hearts Beat As One since 27 December 1989. Angel Of Harlem was performed with a fan, Ignacio from Chile, who was allowed to keep the guitar he played. October was on the printed setlist after Angel Of Harlem but was not performed. I Still Haven't Found What I'm Looking For was on the printed setlist as the last song of the night but U2 played One instead. It had to be restarted after Bono's initial attempts to direct the crowd in a singalong fell out of rhythm.
Setlist and comment provided by U2gigs.com.

On the most part great, though Bono's voice had gone by the end, One was a struggle. Bono was in caricature mode too, but that's just what he does now really!

Wasn't as wildly enthusiastic as I expected...but its NYC, so maybe everyone is way too cool?

So a bit of background, which will add or detract credibility from my review!

I’ve seen them 7 times (Zooropa / Zoo TV 1993 at Roundhay Park, Leeds - no overstatement to say that this was a life changing experience for me and one of my friends; we’d both choose that day if we could go back in a time machine to one point in time!), 2 Popmart (Leeds and Wembley), 1 Vertigo (Manchester), 2 360 (Sheffield and Cardiff), now MSG (and O2 London to come!).
I could listen to Achtung Baby every day, probably twice, without getting bored. Its my ‘need to cheer up or snap into gear’ music of choice!
I’d then choose Pop over Zooropa or Joshua Tree (I know…). It is just my era - I got into dance music at that time, I really enjoyed Popmart, and it didn’t seem over-produced; if anything the opposite. The remixes and reworking of some of those tracks on the Best Ofs and singles just seem overblown to me - and that’s probably my disappointment in a number of the albums since; they seem to have less rawness and are joyless in comparison. Hey ho.

I saw that tickets were on resale on Ticketmaster when I bought tickets for the 02 in London, and was looking to take my wife away for the weekend just after her birthday - she’s a fan too, been to a number of the shows I listed above, so was keen to indulge me if it also involved a trip to NYC too! I’d always wanted to go to MSG - box sports fan, and some of the bands who’ve played there, big sporting events and fights there make it a venue I’d always wanted to visit, and tickets on the front row of Section 210 pretty much dead centre middle were cheaper than nosebleed seats at the O2. Hmmm. Less said about that the better! However, what a bonus!

The venue is great - not as big as I imagined, but fantastic arena, and the seats were perfect. Great atmosphere (and unlike a typical Brit venue it wasn’t full of people totally hammered being generally annoying!) so thumbs up there! It didn’t seem totally sold out, at least to begin with - we both said ‘I’m amazed this hasn’t sold out, unless it fills up really quickly!’ minutes before Bono made his entrance at the rear of the venue; looking, I have to say, a bit comical these days! Its fair to say my wife’s not a fan of the new look… Good entrance though! Onto the stage and into the intro to Miracle. Loved the guitar intro - first few notes really powerful and get the crowd going. Sound quality is good, plenty loud enough and clear. If anything, the new speaker locations is a bit disorientating if you’re half way back… the sound coming from straight in front of you whilst you’re looking to the left / right to see the band. Maybe that’s just me!

Two Hearts took me by surprise, as I’d done my best to avoid setlists before the show, and sounded great - in fact the ‘punk’ / high tempo first few tracks all worked, and its a great start. Iris, with the screen kicking into life, underlined that the new songs sound much better live - I refer you to the ‘overproduced’ comment earlier, a bit of a bugbear of mine. Raw and loud, and with the narrative of the animations on the fantastic screen backdrops they really make sense.

For those asking / questioning ‘why is Bono spitting at the crowd?’ - its a watered-down (hmmm) punk thing; horrible I know, but the punk bands of the 70s (and the fans in return) used to spit at each other apparently. Nice. Its not full-on spitting in fairness, he’s spitting a bottle of mineral water out, which is a bit more upper class!

Still odd if you don’t get the reference!!

Duds and goods then -

One sounds a bit tired now (which I know will wind people up) - not sure if its Bono’s inability to play guitar (its always been a 2 guitar setup), and his voice having gone by that point, but the singalong thing didn’t seem to work. Some may disagree - didn’t seem like the crowd really got it, and probably weren’t as familiar with the words as Bono hoped! You can’t win ‘em all.

Its a BIT staged / choreographed…but I guess it always has been. I genuinely don’t know how much is spontaneous any more! I’ll see in a few months at the O2 I guess!
Not sure about the getting people on stage thing; no idea who Amp was (I believe he’s been on stage earlier in the tour - can’t work out why they got him up again?), and the Chilean guy playing guitar. Sounds a bit joyless, but seems to break the rhythm up a bit and appears a bit clumsy, as Bono and Edge have to talk them through everything.

Sounds great, and new songs are really good with the visuals and the raw, stripped down (loud) production. 360 was amazing, but musically at times it sounded like U2 playing over backing tracks - I know its them, but it didn’t seem 100% ‘live’. This is way better and more like 4 blokes making a racket, which I always love, and where they’re at their best.

UTEOTW sounds (as always) amazing, and the screen interactions make it even better - same with Bullet.

Invisible performance and effects are fantastic.

The screen and the band’s interaction and integration with it (will make sense when you see it!) is brilliantly inventive.

The narrative (from bedroom / lightbulb to Cedarwood Road to the Berlin Wall and beyond) is a tremendous idea - like U2 decided to put the Spiderman musical to bed by doing a real musical with real music.

Fantastic experience, and really enjoyed being in NYC to see it. It sort of had the feeling of a last hurrah - however they do it I hope they go out on a high, and this just might be it.

encore(s):
Stephen Hawking Intro
City Of Blinding Lights
Bono Talking (2)
Mother And Child Reunion Intro
Where The Streets Have No Name
One / All You Need Is Love (snippet)

Comments about the show & recording:

U2 did 8 shows at the Madison Square Garden in New York 2015 on their Innocence and Experience tour. This was the longest
run of shows by U2 in New York city. This was one of my favorite shows by many reasons. Two Hearts Beat As One made a
special appearance (only 3 times played in 2015) after 26 years and it sounded great!! The Troubles (only 4 times played
the entire tour) it is a great song in my opinion and should have been played more often. Angel of Harlem was played with
a fan named Ignacio from Chile who got to keep the guitar at the end of the song. Anton Corbijn, U2's long time photographer
was in the house as well. There is a slight volume adjustment during "Iris" and little interferences here and there especially
during A Song For Soneone and Sunday Bloody Sunday but overall this sounds really good like my Amsterdam recording. This is
a rare recording and the only on being released from this day so far, enjoy it :)