Nice little show, with a weird setlist: SBS is played twice and it closed the show! During the second SBS Bono throws a white flag to the audience and people fight for it... oh the irony. The taper or CD Silver manufacturer "mixed" Fire and 11 O'Clock Tick Tock into a medley and actually sounds very cool!

Transferred and uploaded to U2start.com in October 2019.
Not to be shared on any non-U2 site that uses cashback links.
Love and peace.
www.u2start.com

Out Of Control
Twilight
Surrender
I Threw A Brick Through A Window
A Day Without Me
An Cat Dubh
Into The Heart
Sunday Bloody Sunday
The Cry
The Electric Co.
I Fall Down
October
New Year's Day
Gloria
I Will Follow
---encore---
Fire
11 O'Clock Tick Tock / We Wish You A Merry Christmas (snippet)
The Ocean
A Celebration **(not included)
Sunday Bloody Sunday **(not included)


U2start notes:
Our fellow u2starter eddiemonsoon did a fresh transfer from his Birmingham cassette.
The sound is much better and clearer than in any of the other two pre-existing versions;
whether this is due to it being a different source or a much lower generation casette we don't know.

Interestingly enough, the New Year's Daze version runs a bit too fast (the pitch is higher than
it should, almost by a semitone), the Live From Birmingham 04.12.1982 runs almost perfect
pitch/speed-wise but of course it sounds as it was recorded from London's tube, and this new
version ran a bit too slow (around 3/4 of a tone)* but it was muuuch clearer than the others.

Eddiemonsoon took up on my suggestion to "remaster" and he did another transfer that now
runs at a much better speed and pitch, making it truly listenable. The only downside is that
this new source doesn't include A Celebration and the exceptional second Sunday Bloody Sunday.


Taper notes:
While transferring I was constantly checking U2start and Pimm's book as I wasn't convinced
I was listening to Birmingham at all until Bono mentioned it and because the other two sources
are incomplete or crap it's hard to compare. But in the end it's definitely Birmingham.
Whether it's better because it's lower generation or a different source? is up to people
with 100% hearing and a great deal of time or patience to decide. One thing is certain and that
is that A Celebration and the second version of Sunday Bloody Sunday aren't included on the tape.

Bono coughs a few times during the show, says 'one more' a couple of times towards the end
and sounds knackered but happy. There's a little jolt once owing to the tape flip but for
a 36 year old tape (dated perfectly by a couple of uncirculating songs by a certain other act
being tagged on the end of one side) - it's not bad going.

Transferred and uploaded to U2start.com in October 2019.
Not to be shared on any non-U2 site that uses cashback links.
Love and peace.
www.u2start.com 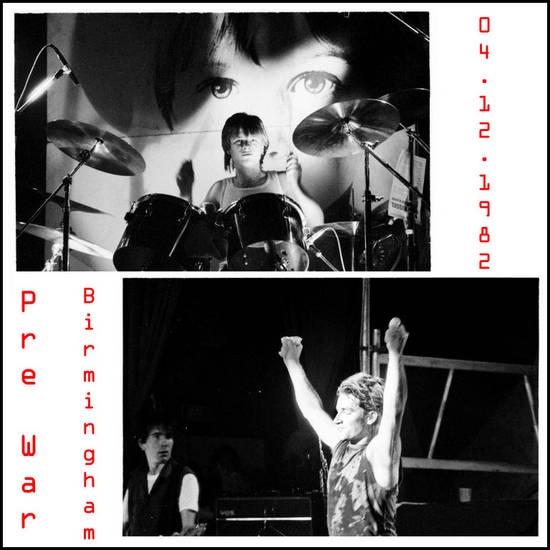