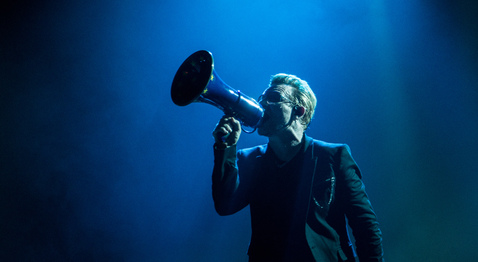 Performance notes: A couple of verses of So Cruel are sung as Bad concludes and segues into Bullet The Blue Sky. This is the first live appearance of So Cruel, though it wasn't performed independently until the tour's third leg (and only acoustically by Bono at that stage).
Setlist and comment provided by U2gigs.com.

Here you can find and post reviews of this show. We encourage everyone that either attended or listened to this show to write a review. Currently we have 16 reviews for you to read.

A phenomenal performance from everyone in the band tonight with every single member giving it their all in order to make up for the incident with one of their trucks breaking down and the result is personally one of the best European Zoo TV shows I have heard with moments such as Edge changing up parts in his solo on Bad and delivering nice-sounding solos throughout the entire performance, Bono is also in great form and sings great renditions of songs while also doing unique things such as trying the "take me higher" notes in Even Better in chest voice, unlike the more common falsetto he does so, with all this combined you do get a really good performance from this leg of the tour.

Absolutely phenomenal, right from the get-go you can tell they are 100 per cent engaged with the performance and this continues throughout the entire show, they even sing with Edge on The Fly and make songs which usually sound great with audience participation even more special due to their fantastic singing and clapping throughout the course of the entire show.

A must-listen show from the 2nd leg of the Zoo TV Tour, the band are in amazing form tonight and deliver fantastic performances throughout, the audience is also amazing so, with all these factors, you're better off not skipping this performance as if you do, you will be missing out one, in my opinion, one of the best performances I have from the entire tour as it really is that great of a show.

Highlights:
Zoo Station
The Fly
Even Better Than The Real Thing
Mysterious Ways
One
Until The End Of The World
Bad (fantastic performance + a snippet of So Cruel at the end)
Bullet The Blue Sky
Running To Stand Still
Ultra Violet (Light My Way)
Love Is Blindness

Disc 1:
1. Zoo Station
2. The Fly
3. Even Better Than The Real Thing
4. Mysterious Ways
5. One
6. Until The End Of The World
7. Who's Gonna Ride Your Wild Horses
8. Trying To Throw Your Arms Around The World
9. Angel Of Harlem / When Love Comes To Town
10. Satellite Of Love

Sound Quality:
Excellent ! It's really a very good recording (soundboard?) with a good capture from the audience noise.

Comments:
This is complete show. This is one of my favorite ZOO TV bootlegs! The participation of the audience is really great (they sing louder than The Edge on the chorus to "The Fly"!), and the band made a good performance. I really recommend this CD. The front cover is not very nice, but you can find a school photo from 1978 in the book and recognize the young Bono and The Edge (I don't know where Adam and Larry are). Mistakes on the titles in the CD include the following: "When Love Comes To Town" is not listed (nor is it indexed) and "So cruel" is listed as being "All I Want Is You".
This is the original pressing on this label.

That was the time of U2-mania! Back in mid 80's the band was huge but not THAT huge. Infact, when tickets were released for
the two dates (20 & 21), people started to stay on queue from the night before. For what I recall, the first date was
cancelled due to Bono being sick and the date of 20th was postponed to the 22nd, with Bono apologizing with the audience
since there were people coming all the way from Sicily, travelling over 800 miles to see the first gig!

The show was excellent indeed, and the band in top form! Several cars (Trabant) were hung on the roof, and many maxi screens
placed all around the venue. With a big remote control, Bono was able to show several TV channels, zapping from one to
another.

I taped this show with a Sony DAT recorder that a friend used to borrow me from time to time. I still have the master DAT cassette
and used it to make the transfer to my HD.

Recorded with a Sony DAT recorder and AIWA external microphone, transfer to HD, edited with SoundForge, indexed with CD Wave
and flac-ed.