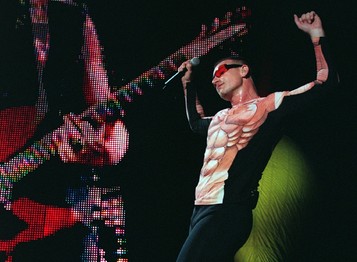 Here you can find and post reviews of this show. We encourage everyone that either attended or listened to this show to write a review. Currently we have 18 reviews for you to read.

I’m giving this show a 5 even though there were errors but they were errors that were pushed through and didn’t ruin the atmosphere or flow of the show crucially. You won’t find many shows with a higher energy than this one, Bono clearly had a point to prove to a certain Mr Harrison.

Would have went 4.5 but the cut bits at the beginning of songs are quite distracting, I think it was to edit out the radio DJ which in fairness would have been more annoying but still definitely not perfect. Still very good though.
Recording: "Pump it up, George" - 5 stars

Very good loud crowd, lively and joined in at all the bits you would expect.

Not one of my favourite tours but one of the best performances of the tour particularly with the energy poured into it.