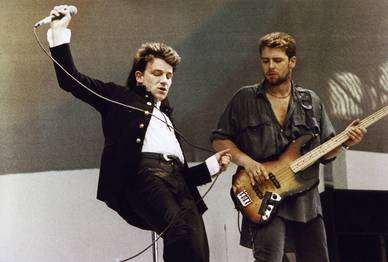 Performance notes: This show includes an epic performance of Bad that lasts more than 16 minutes.
Setlist and comment provided by U2gigs.com.

Another high energy and a fantastic performance from the Unforgettable Fire Tour with everyone putting a lot of effort into their performances tonight and playing great renditions of almost everything in the set, Bono also seems to be in good form tonight as he is able to get through the set without having that much rough moments in songs even though some still happen in spots of the show.

A great audience recording with a nice warm sound to it, in my opinion, allows the listener to experience the show in a well-listenable way while also being able to pay attention to things such as specific instrumentals and the audience of the show.
Recording: "Unforgettably Rare" - 4.5 stars

Another great North American audience for this night in New Jersey with them giving the gig great energy and being overall really enthusiastic with what the band are performing so they are really engaged with the show tonight.

My 2nd Unforgettable Fire concert and just like the first show it features a band who are really enjoying themselves on stage by performing great renditions of songs and even pulling things out such as the longest ever rendition of Bad with some nice snippets done as well so, this performance truly seems like an elite show on this tour or this tour leg so I'd personally recommend someone to listen to this.
Song highlights for me included:
11 O'Clock Tick Tock
Seconds
The Unforgettable Fire
Wire/Give Me Some Truth (snippet)
The Cry/The Electric Co./Amazing Grace (snippet)
Bad/I'm Waiting For The Man (snippet)/You've Got To Hide Your Love Away (snippet)/Ruby Tuesday (snippet)/Sympathy For The Devil (snippet) longest version!
Party Girl
Gloria
"40"


NOTE: This is an outstanding recording of a concert that has been very difficult to find on CDR up until now.
Sound quality and clarity are tremendous.

Complete show: Yes, except perhaps one phrase during "40"

Comments:
Combination of superior but incomplete 1st generation recording and inferior but still fair
99% complete unknown recording from bootleg cassette [Bono is God]. Except where noted,
the superior recording was used and portions of the weaker recording spliced in to create
a 99% complete version of this once rare and still excellent concert.

Restoration Notes:
After having transferred the poorer recording to CDR and SHN, another (better) source was
located. However, this was incomplete. To make a complete set the two recordings were
combined and imperfections in the superior version remedied. Details, as well as known flaws,
are listed as follow:

DISC ONE
1. First 1:55 of "Tick Tock" was missing from superior source, spliced from bootleg cassette version to form complete song
2. Recording level drop at 19:59-20:08 real time (during "Unforgettable Fire").
This was boosted back up to smooth levels
3. Clipping occurs from 20:08 to 20:14 real time. This was left alone
4. Levels boosted from 20:14 to 20:25 (some brickwalling or saturation of levels on source CDR)
5. 39:13 abrupt cut between crowd noise and start of "Sort of Homecoming" left alone
6. "MLK" and "Sort of Homecoming" were indexed together. Now separated.
7. Tiny ticks between several songs removed

DISC TWO
1. First word of "Bad" intro missing, spliced in from poorer version
2. After end of "Pride," better recording faded out. Audience noise and Bono "thank you,"
plus first ~50 sec. of "Party Girl" were missing. Spliced back in from alternate source.
3. Very first utterance of "40" intro inserted from alt. source at 41:55
4. Last 3:00 of "40" missing from better version; spliced from alt. source. However, about a
phrase or two was missing on alt. source as well, between the "feed the world" and
"we are the world" improvs.